Some welcome news, especially for walkers in the area. Two damaged stiles on the footpath (WSTO10/BSJA8), leading from the church, across the meadow, then onto White Lodge at Asserton have been replaced by a kissing gate and a simple gate respectively.  This adds to the kissing gate at the start of the footpath by Church Cottage that replaced a broken stile last year and hopefully, will be easier for more people to access the route.

So, whilst before we had this: 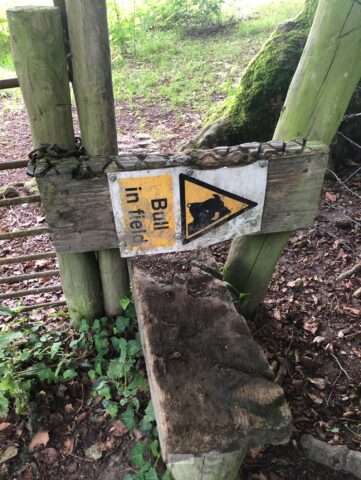 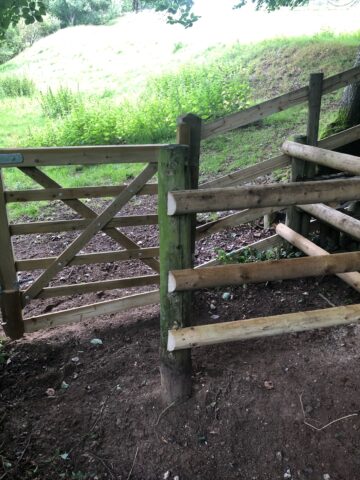 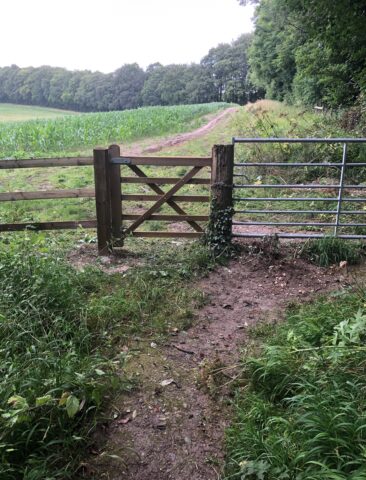 …almost complete, but the illegal signage on the kissing gate has yet to be removed.

You may find it surprising, but the Parish Council has little or no influence, or responsibility, when it comes to rights of way issues.  That responsibility lies with the landowners involved and Wiltshire Council, who should be approached in the first instance; though we do like to know if there is a problem as we may already be aware of work in progress or suggest how best to raise the issue with Wiltshire Council.   Thank you to all those villagers, from Winterbourne Stoke and villages beyond, who are making full use of the My Wilts website and app to report issues with rights of way in the village and between villages directly to Wiltshire Council.  Many find this route the most direct and least confrontational, as it can be done anonymously.

Wiltshire Council has a wonderful resource on its website and that is the Wiltshire Council Rights of Way Explorer.  This shows all the rights of way currently on the Definitive Map of Wiltshire and the type of route they are (eg footpaths, bridleways, etc).

There have been huge changes to the legislation around rights of way in recent years, most notably those relating to changes brought in by the Equality Act of 2010 that impact on stiles, kissing gates and gates as embodied in British Standard BS5709:2018.  It basically says that any new or replacement structures on rights of way must be the least restrictive possible for any lawful users.  So, nothing is preferable to something, a gate is preferable to a kissing gate and a kissing gate is preferable to a stile.  However, it seems that well-maintained structures like stiles can be kept, until they have to be replaced.  A guide to BS5709:2018, Understanding the British Standard for Gaps Gates and Stiles can be found here produced by the Pittecroft Trust.

We emphasised any lawful users in the last paragraph, and it is now a very important concept.  Thanks to Molly-Mae for leading us to this one, as she had concerns about being unable to use local footpaths with a pram because of stiles, etc.  In the old days, if you weren’t fit enough to climb over a stile, the surface of the path was poorly maintained, vegetation was sky-high, etc, it was very much a case of “tough luck”.  However, the situation is now very different. All lawful users have to be considered when it comes to new structures and this specifically includes: people of all ages and abilities, including users of mobility vehicles (wheelchairs and push-chairs), etc and with dogs (and cycles of all types and horses/carriages on relevant rights of way.).  So, the intention is that more and more routes will become accessible to more and more people, with the passage of time.

A huge resource for walkers, cyclists and equestrians alike is the British Horse Society (you might not believe this, but they have a bridleway database called “Dobbin” – only in Great Britain!).  They produce a number of guides that can be very useful, especially with increasing numbers of people going into the countryside and finding problems on rights of way.  A particularly good link that explains what to do about blocked and obstructed bridleways, that also applies to footpaths and byways can be found here.  The Ramblers are also a great resource and very active in ensuring rights of way are maintained and re-claimed.  It is worth taking a look at its “Don’t Lose Your Way initiative.  Increasingly influential is the Open Spaces Society, who are working together with the British Horse Society to further mutual aims. One of its projects has been to determine why so many rights of way are missing from the Definitive Maps of the UK, including those in Wiltshire and more locally.  It makes very interesting reading if you are at all interested in the history of your own community.