Last night (28th June 2018), the Chairman attended the A303 Stonehenge Scheme Community Forum at Antrobus House Amesbury, along with representatives of other Parish Councils and community groups.  Despite there being some sort of football match going on at the same time, the meeting, on the subject of the Legacy and Benefits of the A303 scheme was well attended.  Darren Henry, Wiltshire Councillor for the Till and Wylye Valley was also present.

The session was facilitated by Holly Taylor, the Communications and Engagement Manager for the A303 Stonehenge scheme and led by Esther Gordon-Smith, Benefits Lead for the A303 Stonehenge scheme, assisted by Emily Dawson, Legacy Lead for the A303 Stonehenge, A14 and Lower Thames Crossing schemes.  The purpose of the session was to look at the potential benefits and legacies of the scheme, over and above the delivery of the A303 superhighway and how Highways England is approaching them. This is something we have mentioned before and for which we have a forum already set up to capture any ideas you might have on the subject.

We are still awaiting the appointment of an independent chair for these meetings.  Although they have been set up by Highways England (HE), they want to step back and allow the various fora to have independent control; they say they don’t want to lead but to participate.  Clearly though, having an independent chair would be presentationally favourable to HE.  We were also told that the chair of the forum would also represent the forum at higher level meetings – especially those that dealt with funding.  That would be beneficial to the Forum members.

In terms of the recent consultation, we were told that there had been around 5,000 responses (there were around 10,000 for the first consultation).  HE felt the scale of the overall response and the drop in number were in line with similar exercises in the past.

The key thing to come out of the meeting was the fact legacies and benefits, like any other aspects of the programme delivery, need to be formally planned.  The first stages of this process are to be able to identify those legacies and benefits that can achieve the most.  Subsequently, attempts will be made to identify sources of funding and collaboration to take these ideas forward.  It was also important to not that legacies and benefits are unlikely to run in parallel with the road building and are likely to continue after the road opens.  The take home message is that we are all in this for the long haul.

Esther Gordon-Smith unveiled a fairly complicated graphic that captured the sorts of areas where we (All of us!) should be looking for benefits and legacies: 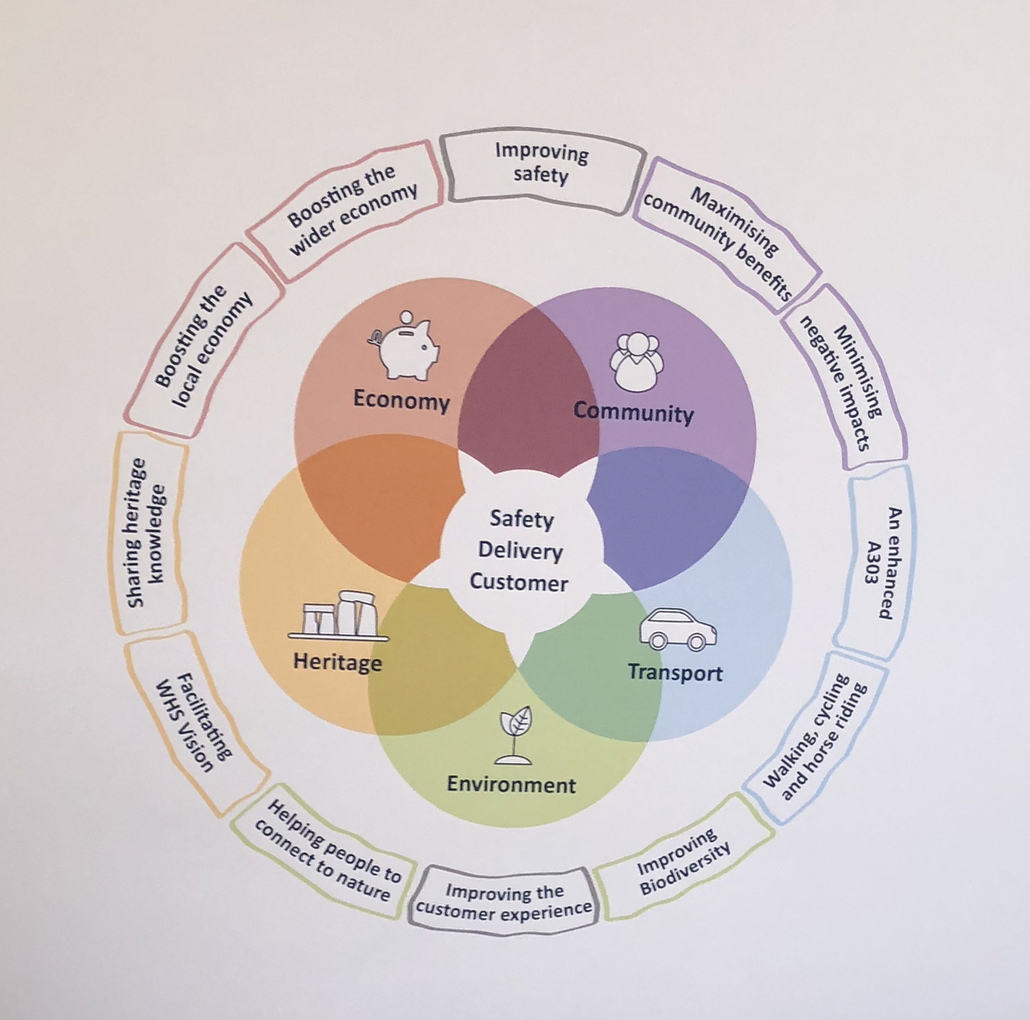 A large part of the meeting was spent identifying ideas that could impact on one or more of these areas.  HE are currently collating these and we will let you have sight of them as soon as we receive them.  However, we don’t have a monopoy on ideas that might contribute to the benefits and legacy Winterbourne Stoke can derive from the construction of the bypass.  Do you have any ideas that you want to share, however off-the-wall, or wacky they might seem?   If you do, pop over to the forum and add them there.  Don’t be shy, you are going to be hard-pressed to dream up anything more off-the-wall than the “writer in residence” for the A14 scheme.

If you look at some of the websites dealing with the legacy and benefits issues raised by the A14 scheme, it rapidly becomes apparent that Cambridgeshire Council has played a significant role in pulling together the local communities.  We don’t yet seem to have that level of participation from Wiltshire Council; notably absent from the meeting last night was Cllr Fleur de Rhé-Philipe, who is the Wiltshire Council Portfolio Holder for Strategic Highways, Areas of Outstanding Natural Beauty, European Structural Investment Fund, Canals and Military-Civilian Integration.  With a portfolio like that, you might expect she would be all over the A303 Legacy and Benefits issue like a rash,  given it involves strategic highways, investment and military-civilian integration.

In the diagram above, one of the key elements is the environment – and Winterbourne Stoke is certainly going to get a huge environmental legacy for good or ill – the road itself, the noise and pollution it brings, the chalk spoil terra-forming the landscape, and who knows what else besides.  Earlier in the month we received an email from Robert and Fiona Turner of Manor Farm showing a photograph of a section of the A14: “to give village an idea of road construction/land take devastation during construction”.

This is, indeed, horrendous to look at, but it does need to be put into context.  The A14 is going to require some 5 million tonnes of construction material to build and 2.5 million tonnes is being taken out of the ground right next to the road.  As the the new road is being built near the Fens, the water level is just below ground level, so to abstract clay, sand and gravel from borrow pits they are having to dewater the ground and then pump the water back into the ground via a series of lagoons.  Whilst doing this, they have to protect the water levels in the River Ouse and the large fishing lake shown at the top right of the photo.  Many of the brown fields are caused by the dewatering and will green up quickly once the dewatering stops.  As far as we are aware, there is going to be no local abstraction of building materials, so HE will be adding to the land surface with the tunnel spoil, rather than removing it. On the other hand, we don’t want to underestimate the scope and the scale of the impacts to Manor Farm.

We wonder if the “white desert” at the eastern end of the Packway might not be a better example of the initial visual impact the scheme here is going to have on the landscape, albeit on a much smaller scale than will be experienced here, but might offer at least an idea of how quickly the adverse effects of construction might disappear into the landscape.