Back in September 2017 we published a post “Nobis Villa in Agro” that predicted that Wiltshire Archeology had found what might be a Romano-British villa, or range-type site, in a field between Winterbourne Stoke and Berwick St James; lying bang in the middle of the, then, proposed southern route for the A303 bypass for Winterbourne Stoke.  We showed the anomaly we had spotted on low angle satellite imagery from Google Earth and suggested the building was lying roughly in an east-west orientation and was around 60ft long.  There was quite a lot of scepticism about our suggestion, but it seems we have been vindicated by the geophysical surveys.

Highways England have recently published the three volume Geophysical Survey report under the Environmental and Heritage section of this page.  Details of the relevant survey appears in Volume 2. 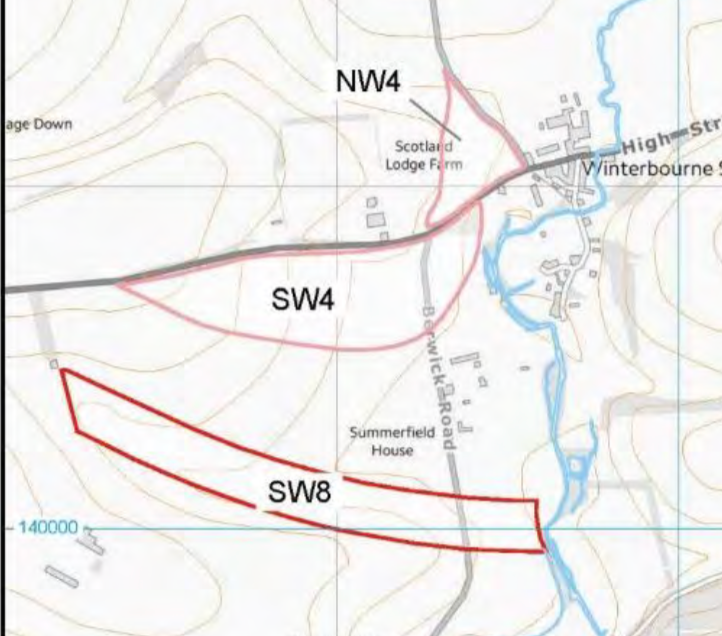 Highways England carried out the survey on only parts of the proposed bypass routes, so it is possible that much more archeology associated with the current finds in sector SW8 remains to be discovered.  The site we are talking about lies at the eastern end of SW8, on the western bank of the River Till.  No geophysics was carried out immediately to the east of SW8 on the western side of the River Till, despite the obvious ground markings, field systems and building remains in the fields back towards the southern edge of Winterbourne Stoke that appear on satellite imagery.

The geophysics interpretation of the particular site in question has produced the following layout: 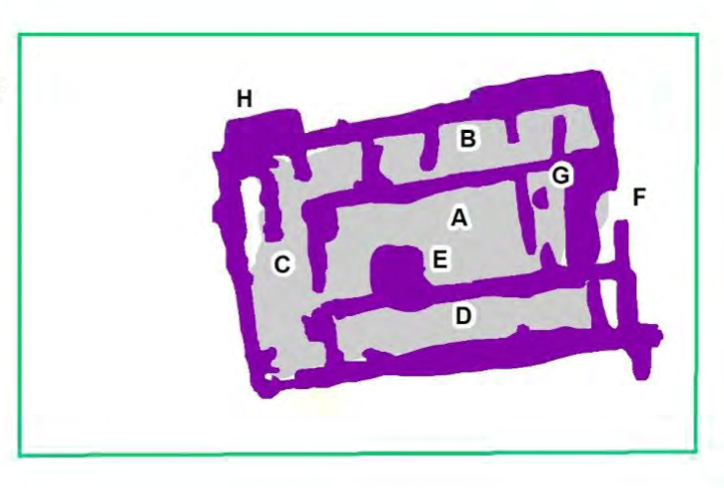 So, it seems our interpretation from Google Earth was pretty good after all.  A very brief extract of what has been written about this site is as follows:

“The form of the building is typically Roman in appearance, constructed of three corridors (B, C, D) surrounding an 11.5 m x 6 m courtyard (A). A high amplitude response (E) can be identified within the courtyard could relate to a well, or another pit-like feature extending to significant depth. A possible entrance to the building lies to the east of the courtyard at F, where a gap (2 m) can be seen in the eastern wall of the building, opening into a smaller courtyard or room (4.5 m x 6 m). Within the north-eastern corner of the possible smaller courtyard a 1.5 m square room (G) has been identified. A similar 1.5 m x 1 m (H) area of high amplitude can be also seen externally to the north-west of the building.”

If you are interested in seeing more, search Volume 2 for “Area 16”.   However, this isn’t the only new find, north or south of the current A303.  There is an awful lot of new and interesting archeology in many of the areas in which Highways England commissioned the surveys and these are reproduced in Volume 1, Volume 2 and Volume 3 of the report.  We would draw your attention, in particular to areas SW4 near Scotland Lodge Farm, SW3 between Hill Farm and the A360, on Oatlands Hill, and areas NW6 and NW5, to the north of the A303 and SW3, on Manor Farm.  Of particular interest here is Area 17 (see Volume 3) where a previously unrecorded Bronze Age round barrow has been discovered.  Clearly, we are only scratching the surface here and we would commend all three volumes to you.  It’s worth noting that the geophysics work was continuing earlier this week in the area immediately to the west of NW6.

Copyright of the two images above is claimed by Wessex Archeology and use here is under the 2014 exception for quotation.