Our apologies for using a Latin title for this post, but we hope you will soon see why.  Back on the 31st of July we published a news item entitled “What Lies Beneath” having seen Wiltshire Archaeology at work in the field that runs alongside the Winterbourne Stoke to Berwick St James road, close to the boundary between two villages and close to the River Till. 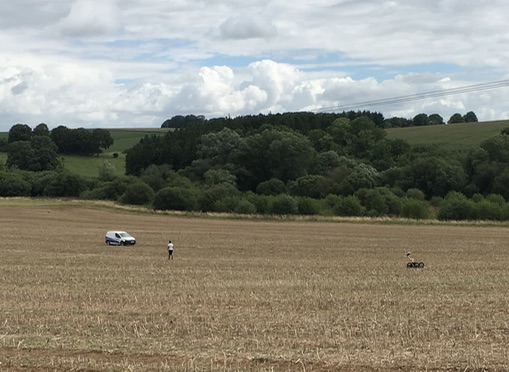 What we didn’t say at the time and have resisted saying in public until now  is that we had an idea what they might have stumbled across – but little hard evidence.  Our hypothesis was based purely on the area where the ground penetrating radar was being used, the known history of the Till Valley, the clusters of springs along the route of the Till and what appeared to be “missing” from the local archaeology.

Having seen Wiltshire Archaeology at work, we turned to Google Earth to see if there was anything there that might confirm our suspicions.  In the Pro version of Google Earth, you can examine the latest images of an area, but also historical imagery.  Those images taken in winter, with low sun angles, are often very good at showing up ground features that aren’t obvious at other times of the year.  If you get really lucky, you can sometimes see ground features because of the different rate of growth of crops that overlay stone foundations.  We weren’t that lucky, but we did find an image taken on 26th January 2005 that had some possibly interesting features. 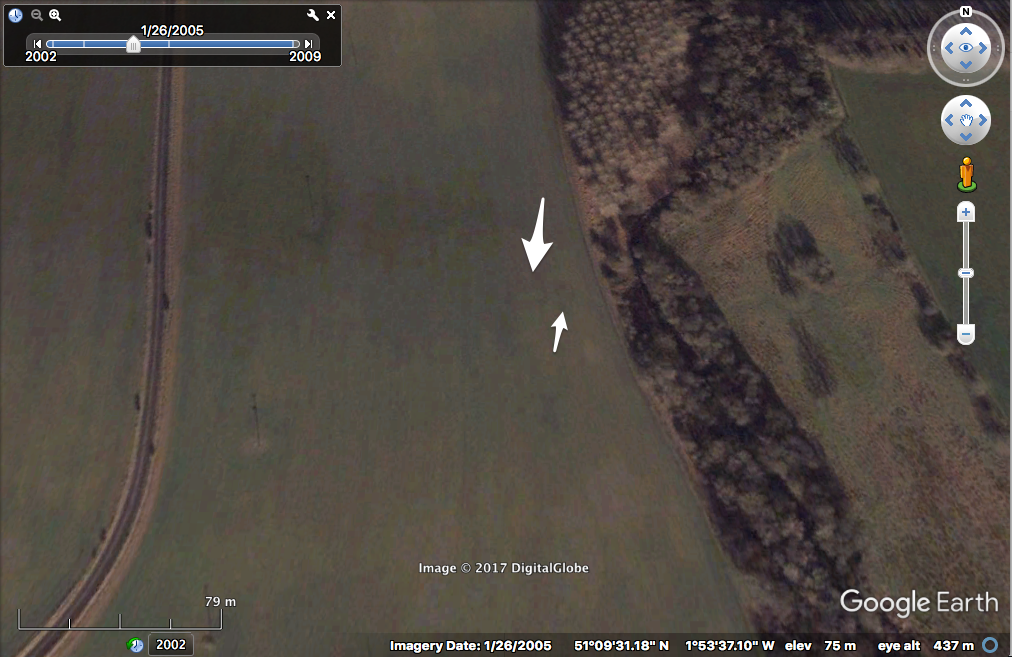 It’s quite hard to see, but at the end of the large arrow, there seems to be a large rectangular feature about 60ft by 20ft in size, which runs pretty much East-West in its longest dimension.   In other words, it has a similar footprint to St Peter’s Church.   To the East are two or three much smaller square foundations.

This had all the features of a Romano-British site, but we still didn’t want to set hares running because of a phenomenon called pareidolia.  The human brain is very prone to ‘seeing’ familiar images of shapes, people and animals when you look at a picture or view –  Donald Trump’s image on a piece of burnt toast, clouds that look like flying saucers, etc.  Although we thought it might be a Romano-British site bang on the route of the proposed southern bypass, we still weren’t sure.

So back to the title: Nobis Villa In Agro? – Do we have a villa in the field?

On Friday, following the announcement of the northern bypass preference, we asked Highways England consultants what had been found and they offered that it was “possibly a Roman-British site”.  However, that was their working hypothesis and still needs to be confirmed – they noted that the site could be much more recent than that and the truth is only likely to be uncovered through excavation.

The reason for mentioning this now, is of course its potential for developing local tourism in the future.  Mosaic floors (and that is a huge stretch of the imagination!) are very good at bringing in the tourists and boosting the local economy.

We’ve also noted the ground penetrating radar being used north of the A303 more recently, suggesting that even more interesting sites are turning up there as well.  All the archaeological work that has and is being undertaken as part of the Highway England planning will be published and we will provide links to all that directly affects our Parish.  It’s then up to us how we best exploit it.