When the Chairman of the PC attended the inaugural meeting of the A303 Stonehenge Community Forum, he met Myra Bennett, the British Horse Society’s County Access Officer for Wiltshire, and they agreed to meet up earlier this week for further discussions, as it seemed likely that their interests might align with those of the village and many of the villagers.

Since that meeting, Myra has provided us with an open letter, which can be found here in the “Notices” section of the website.  If you walk out of the village, ride a bike, or ride a horse, we would strongly suggest you have a look at what the British Horse Society has to say. 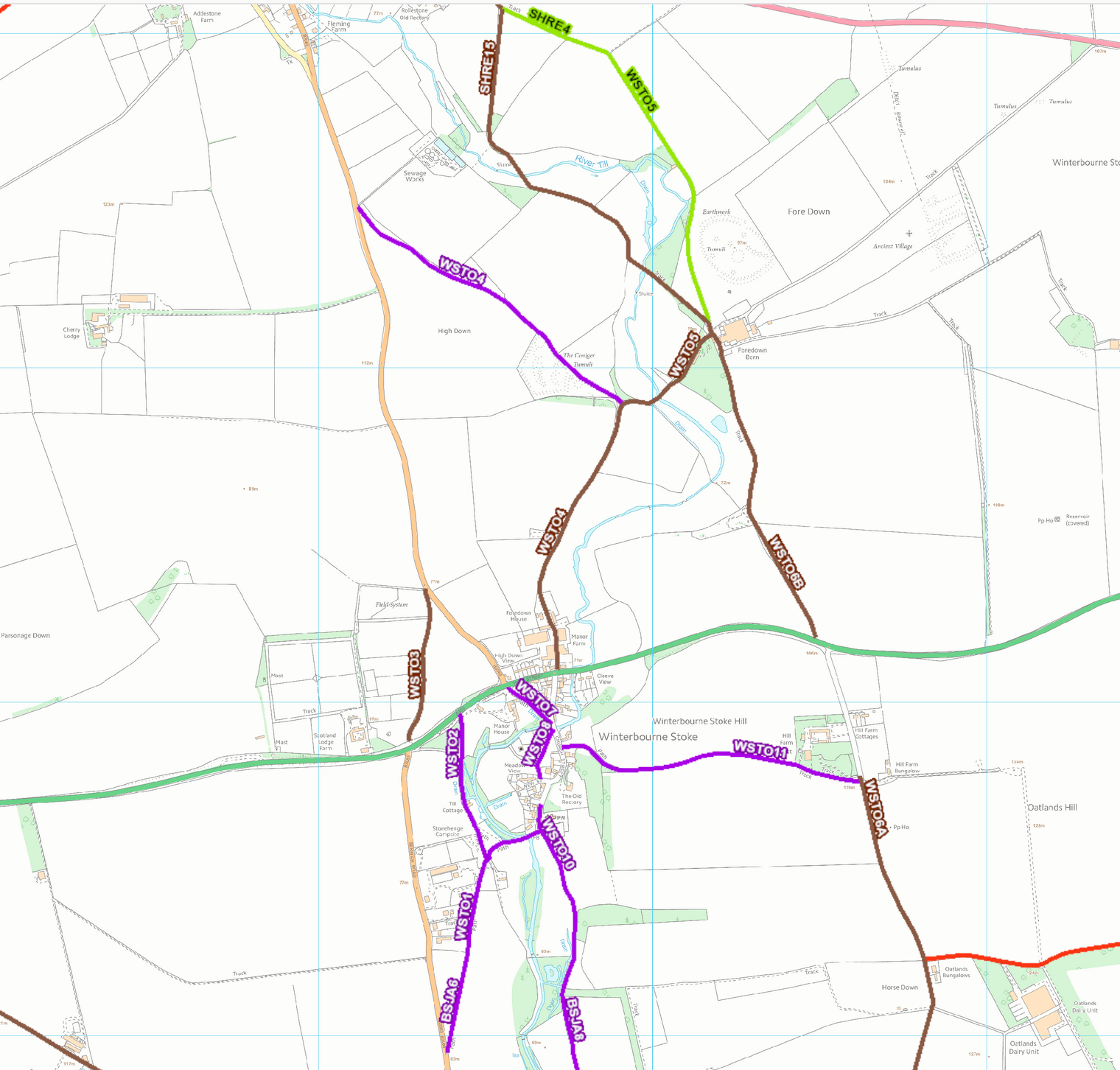 On the Wiltshire Council mapping above, footpaths are in purple, byways are brown, restricted byways in red and bridleways in green.

One of the greatest problems we have, as a village split by the A303, is safe access onto byways.  There are no byways that leave the heart of the village and head south.  The only strictly legal options in that direction, are to head out east or west onto the A303, before cutting back south on byway WSTO6A,  past Hill Farm, or south along the B3083 towards Berwick St James; less than ideal for cyclists – especially children – or equestrians.

Options for going north are not a lot better.  You first have to negotiate the A303 – difficult when there is a lot of traffic and dangerous when it is speeding through.  You have three alternatives – of sorts.  You could try byway WSTO3, from just oppoite the northern end of the B3083 Berwick road to a few hundred yards up the B3083 to Shrewton – good luck!  You could ride north on WSTO4, past Foredown House and onto either byway WSTO6B, or byway/bridleway WSTO5, north westwards Shrewton, but both these routes bring you out on the A360 at Rollestone – hardly a relaxing place.  The truly brave (some might say foolhardy) pedestrian, cyclist or horse rider, might – once they have found a route to WSTO6A, try crossing the A303 east of the village, through the small gate in the hedge on the northern side and onto WSTO6B which joins on to the two previously mentioned routes to the northwest.  Whilst you occasionally see a walker using this route and rarely, a mountain biker,  we’d never spotted a rider in over 30 years,  until this morning.  It was heart stopping to see a clearly spooked horse being led across to the south, with a juggernaut bearing down from the east at high speed…

Given all of the above, plus the fact that all new road schemes are meant to be equestrian friendly, you’d have though that Highways England might have tried a bit harder than they have.  We’ve prepared the map above based on the one provided by Highways England in the consultation document.  We have identified paths and byways using the Wiltshire Council numbering scheme in red and key points at junctions etc, with blue letters.  You can get copies of this map here as a PDF File and here as a PNG file.  We hope you will use this as a common scheme in your own responses to Highways England.  It will also make it easier to discuss things with other villagers.

Here are a few points to ponder when you are responding to the public consultation:

1. Although a pedestrian and cycle route is proposed between points A and T on the map above, along the course of the “old” A303.  Highways England don’t propose it being available for equestrians.  It needs to be a restricted byway;

2. They propose to run this pedestrian and cycle track on the northern side of the “old” A303 from P to S – the southernmost of the two new roundabouts at Longbarrow. 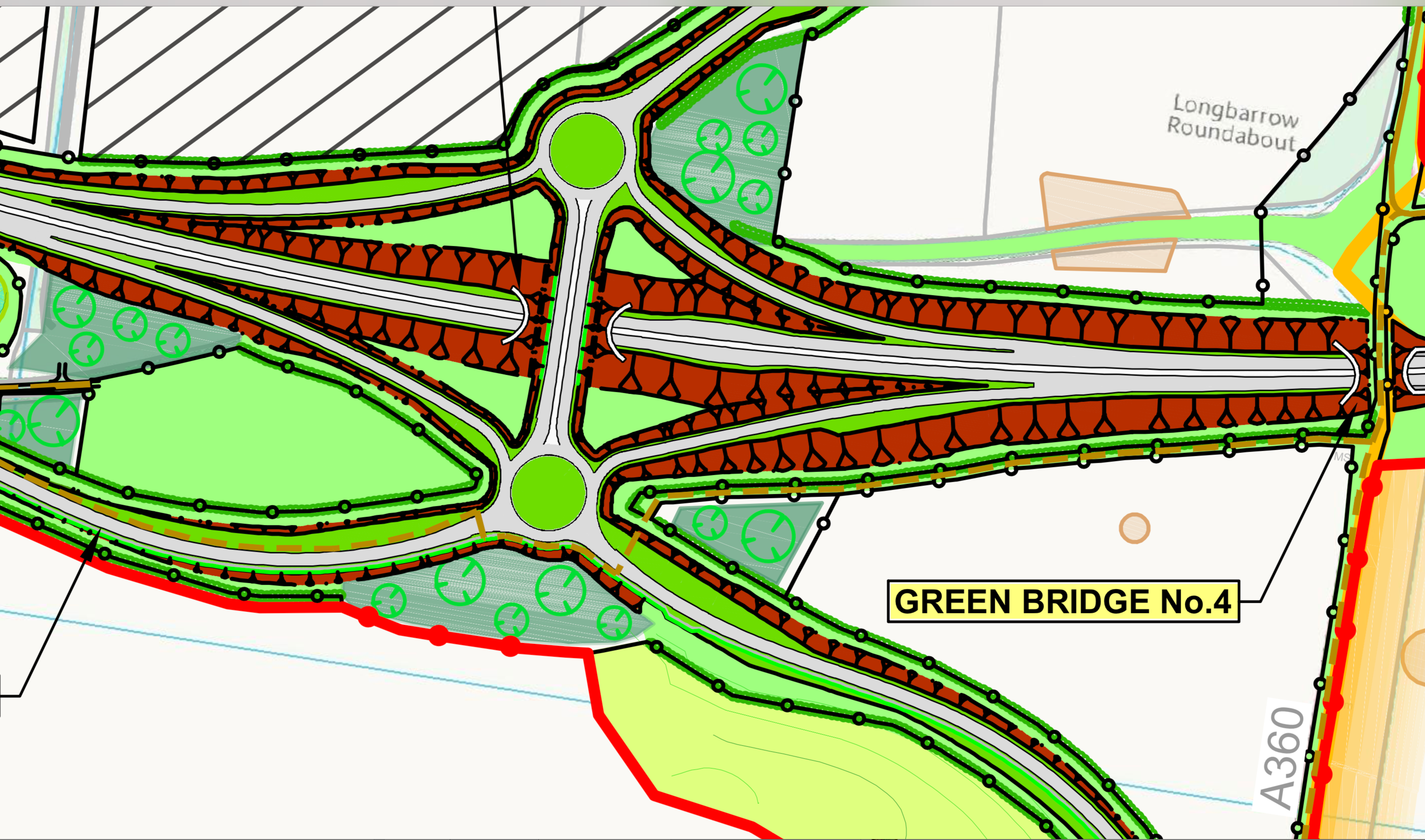 This means that you would have to cross the “old” A303 into the village right next to what is going to be a very busy roundabout; not very clever.  This could be avoided completely by moving the footpath to the southern side of the A303, reducing the width of the current road to achieve traffic calming and avoid the need for a land take.

3. Worse still is the proposed crossing of the A360 to join up with Green Bridge No.4 and into the World Heritage Site.  According to Derek Parody of Highways England, it’s going to be at level, no underpass or overpass.  So, we are going to be dodging the traffic travelling at high speed to and from the direction of Salisbury – if that is allowed to happen.

4. We’ve also been made aware of the likelihood that the livery at Scotland Lodge could be cut off from its usual exits to points north during the construction phase – possibly for several years.  As it stands, and with no alternative that we are aware of offered, that seems completely unacceptable.  One option might be to construct the new proposed byway from A to G over the proposed Green Bridge 1, then from G to D ,as an “advance work” to give Scotland Lodge, and others, a hacking route out of the village before their northern exit is closed off.

5.  That said, the long-term use of the proposed Green Bridge 1 is likely to prove highly contentious.  It may act as a magnet to a host  of undesirables from outside the village.  On the other hand, the old section of the road from A-B might be a potential site for some legacy features for the village and wider community.  Lots of opportunities for discussion here and many issues to consider.  For instance, how do farmers get to fields north of the A303 if there is no permanent crossing at A to G?  One option might be an entrance off the B3083 at H and a track between H and G.  Of course, Green Bridge 1 is also meant as a bat crossing…

6. There’s then the issue of BSJA3 which currently opens onto the A303 at E.  That clearly isn’t going to be acceptable. So, what happens to farm traffic wanting to join the A303?   Presumably it will be expected to travel west from E to D at Yarnbury Castle, but what then?

7. Already, crossing from SLAN3 at D, north onto BSJA4 is very dangerous – even with a central divide.  The route is used regularly by pedestrians, cyclists, equestrians, farm-vehicles, the Army, off-road motorcycles and 4x4s. The traffic on the A303 is currently either at a standstill or travelling at high speed, but in the future it will (hopefully – given all the grief we are going to have to suffer!) all be travelling at high speed.  Consequently, given the need to cross north to south and the danger of doing so at grade, a proper crossing is needed.  One option might be to close both exits onto the A303 and move Green Bridge 1 further to the west from G to D; thereby solving two problems.

This is only scratching the surface and there are likely to be many more issues associated with paths, byways and bridleways.  Villagers: please use the forum pages to discuss these issues or to add more to the list. You can also come along to a Parish Meeting in March (details to be announced soon) to air your views.