It’s been a really interesting and concerning week in the run up to Christmas. Sunday saw more police activity in the village than we have seen for many a long year. The forecourt of the Stonehenge Filling Station was full with police vehicles, police men and women, PCSO’s and a bunch of somewhat dodgy looking chaps in combat jackets; accompanied by a motley selection of long-dogs in need of a square meal.

Local farmers and landowners around Stapleford and Winterbourne Stoke had been reporting their concerns of illegal hare-coursing activities in the area. Following the police swoop, 9 individuals, some from as far away as South Wales, have been reported for offences under the Hunting Act. The police seized two vehicles, mobile phones and 10 dogs. Some of the dogs may have been stolen and enquiries continue. Rural crime is a growing problem and back in October, Wiltshire Police launched Operation Artemis – named after the Greek/Roman goddess of the hunt and of wild places. Op Artemis is part of a broader, national initiative to hit at poaching operations called Project Trepass, which aims to coordinate action across England and Wales through prevention, intelligence, enforcement and reassurance.

If you see any activities of this sort (the lay-by west of the village is a common gathering point), please call 101 and quote ‘Operation Artemis’. If a crime is in progress, call 999.

Late yesterday (Wed 19th December), police were called to an attack outside the Stonehenge Inn, Durrington. This has left a 20 year-old with critical injuries requiring brain surgery. After initially being taken to Salisbury District Hospital, the man was later transferred to Southampton General Hospital. Two other men were injured during the incident.

Three men, aged 25, 27 and 29, from the Port Talbot area of South Wales, have been arrested on suspicion of grievous bodily harm with intent and are currently in custody.

There is no suggestion that the two events are linked and as one local wag observed: “Criminals from South Wales have been causing problems in this area for years – at least since the time they started dumping blue stones here during the construction of Stonehenge.”

It will come as a relief to hear that Neighbourhood Watch have launched a new website:

Well, after all that excitement, we would like to wish you all a Merry Christmas and a Happy, Crime-free and Peaceful New Year.

Please note that the Planning Inspectorate website now carries an online form to allow you to register as an “Interested Party” in the forthcoming Examination of Highways England’s proposal for the A303 Stonehenge Scheme.  The form can be found here.

Although the Parish Council will be registering  on its own account, we would strongly urge any residents of Winterbourne Stoke with particular interests which may not be covered by the Parish Council’s response (details of which will be published on this website asap), to register an interest on their own behalf.

A guide to filling out the registration form can be found here.

December 1st 2018 marks the start of our 6th year of flood monitoring within Winterbourne Stoke and it will be the third year this information will appear here on the village website. As we gather more and more data, the harder it is to capture it all in a useful form, so we have made a few minor cosmetic changes to the graph to facilitate this.  The first proper graph of the season will appear on the “Notices” page of this website on, or shortly after, Friday 7th December and will look like this:

The different coloured traces should be faily self-explanatory with the red trace being the current year, purple being the 6-year average.  The black trace represents the last year we had groundwater flooding in the village and the green trace shows a year with little winter rain and a late Spring.  Current borehole levels are around 79 metres, well below average, but rising.

The Planning Inspectorate: A303 Amesbury to Berwick Down Notification of Decision to Accept an Application for Examination for an Order Granting Development Consent

Please keep an eye on the Planning Inspectorate website, especially if you wish to register as an “Interested Party” for the purposes of the examination process.  The invitation to register should appear in the next few weeks.

The Return Of The Bell Inn – A Village Pub Again

We are delighted to see the return of the Bell Inn and wish Rob, Emily and the rest of the team every success in this new venture. It’s nice to have a village pub again! 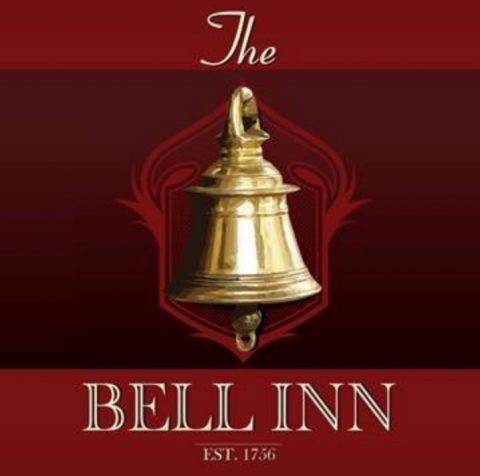 We hope that the village will pull behind them and give them every support.  Early feedback from those who have been to drink, eat, or both, has been entirely positive. 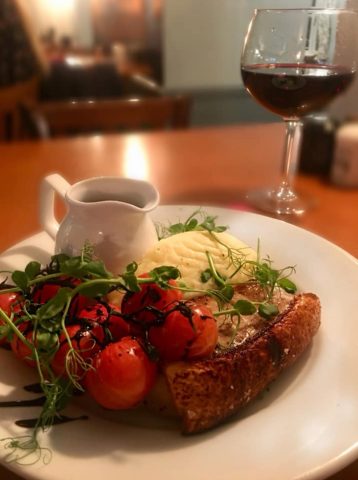 Onboard and Online: A303 Amesbury to Berwick Down (Stonehenge) Scheme Update

It has just been confirmed that Highways England  has applied to the Planning Inspectorate seeking to gain development consent for the A303 Amesbury to Berwick Down scheme. This is a requirement as the scheme is classified as a Nationally Significant Infrastructure Project.

The application now appears on the Planning Inspectorate’s website

The Planning Inspectorate has 28 days to decide whether to accept the application for examination. If accepted, it will schedule a timeline of detailed examination of the application, in which stakeholders and the public can participate. We expect examination to begin in early 2019. 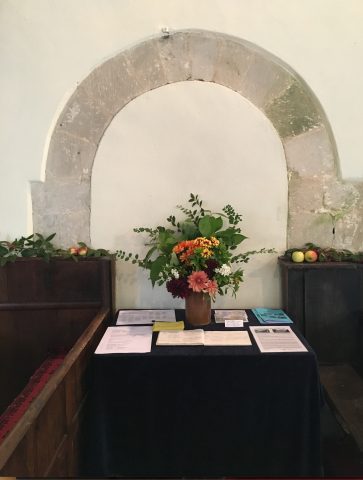 It was good to see so many in church for this year’s Harvest Festival.  The church had been beautifully decorated by Melissa, Helen, Karen, Dee and Olivia with flowers and fruit adorning all the windowsills and ledges.  Melissa’s wonderful pedestal arrangement included carrots and parsnips and Ed was particularly touched that she had placed a single red rose in the centre in memory of Joy (who died a year ago on 7th October).  Thank you to all those who took part in the service and congratulations to Ben for his fantastic drawing, depicting Harvest in Winterbourne Stoke. 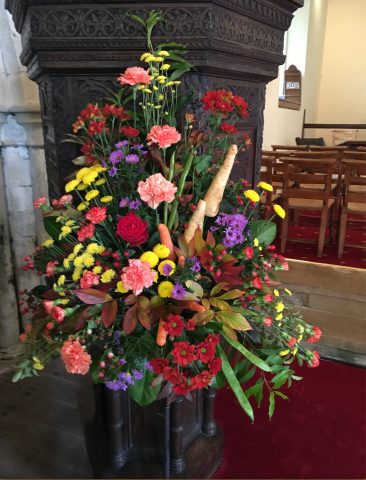 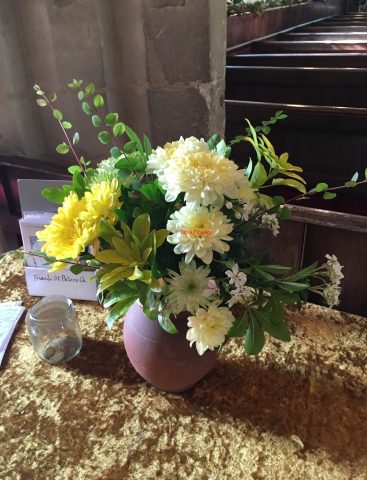 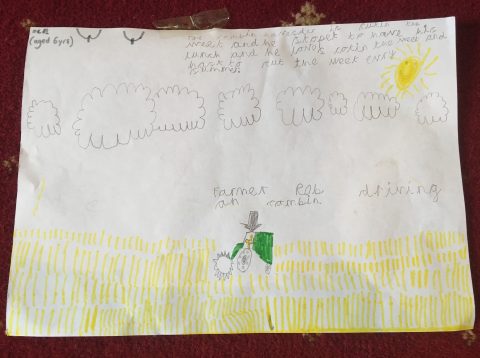 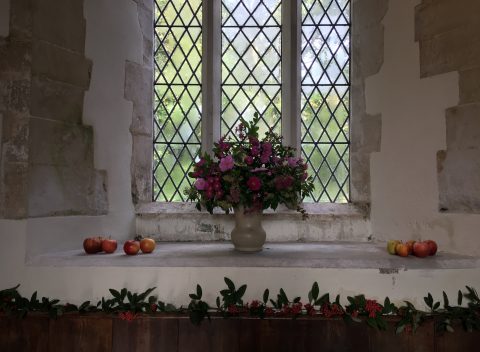 Onboard and Online: Electoral Review of Wiltshire Council 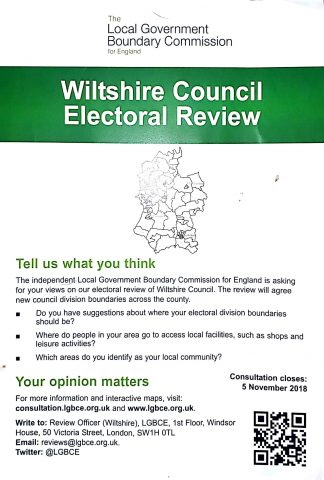 The Local Government Boundary Commission for England (LGBCE) is carrying out an electoral review of Wiltshire Council.

The aim of the electoral review is to recommend divisions boundaries that mean each councillor represents approximately the same number of voters.

We also aim to ensure that the division boundaries reflect the interests and identities of local communities, as well as promoting effective local government.

To achieve these aims, we need to re-draw division boundaries across Wiltshire.

From 28 August 2018 to 5 November 2018, we are accepting opinions and comments (submissions) from the public on where you believe division boundaries should be in Wiltshire Council.

The Commission now needs information from people and groups across Wiltshire to help it to produce new divisions boundaries to accommodate 98 councillors.

Onboard and Online: Asking Questions

The Parish Council is always happy to receive your questions and can, hopefully, answer them.  The usual way of doing this is for you to speak with a Parish Councillor, call them on the phone, contact them by email, or by letter.  You can also raise a question for the Parish Council by getting in touch with the Clerk, whose contact details are…

…and appear at the foot of every page on the website (https://winterbournestokepc.org.uk).

If your question is a private matter, or you don’t want it to be widely known that you have raised it, then this is the best way to do so.  However, if it is a confidential matter, please speak directly to a councillor/the Clerk and make this clear, or mark your email/letter as “Confidential” and send it just to the Clerk, Chairman, or one of the Councillors.

We’ve recently had a good suggestion from a Parishioner about improving on this.  Sometimes you may have a question that is better raised with the Parish Council as a whole; perhaps because it might impact on most Parishioners, or because it might be of more general interest.   In an ideal world, you would come along to the next Parish Council metting and raise it, in person, during the regular “Adjournment for Residents’ Questions” session that takes place at the start of every meeting – we would certainly like to see you there!

However, we recognise that in this busy world, you might not have the time to spare to come along to a Parish Council meeting in person.  If that is the case, please send your question directly to the Clerk, a minimum of 3 working days before a scheduled Parish Council Meeting, and your question will be read out on your behalf and treated as if you were asking it in person.  Depending on the sort of question you ask, it may finish up as an agenda item for discussion at a subsequent Parish Council meeting.

Onboard and Online: For Loyalty and Devotion 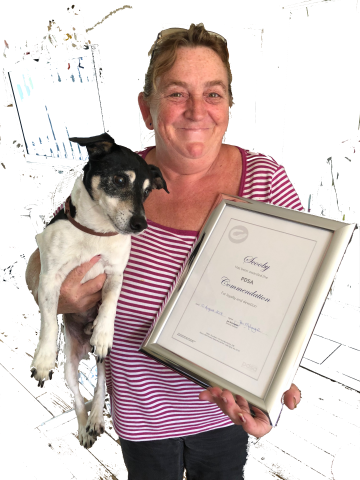