Planning consent is currently being sought for:

Click here to transfer to the relevant Wiltshire Council webpage

BT’s Response on Superfast Broadband in the Village

Following our email yesterday,  BT’s Bill Murphy immediately undertook to chase things up with the regional team working with Wiltshire Council’s superfast broadband team, on our behalf.   Today (4:00pm on 08/12/2016) we received the following email”

If you can’t read the original above, the important bit says:

“…Work is progressing on bringing fibre broadband to Winterbourne Stoke. There are no outstanding way leave issues but we will need to use a  “mole plough” to install the fibre along part of the route which may require a road closure – the detailed plans are in preparation to identify whether this will be needed.
We anticipate that the new cabinet will be installed and accepting orders in the spring of next year.“

Clearly, this calls into question everything that Terry Young has been told recently by Wiltshire Council officials working for Wiltshire Online.  It will be interesting to see what Wiltshire Online now come up with, as clearly either they or BT are wrong.   Sadly, no information that Wiltshire Online have provided to villagers, in response to legitimate questions, has yet proved reliable.

Seemingly, not good news! Yesterday, we were alerted by villager Terry Young to the probability that we face a further delay to the provision of superfast fibre broadband to the village.  The Parish Council had been assured by BT back in the autumn of 2015 that the installation would be complete by late 2016 and that you would be able to sign up for the service in early 2017.   In the summer, as a result of Wiltshire Online and BT sending out leaflets saying you could already get the service when you plainly couldn’t, the Parish Council recontacted BT at senior level for an update.  We were re-assured that although there had been a slight slippage, maybe 3 months, we were in the build phase and things were moving forward.  This statement was reinforced because we were made aware that BT had sought, and been granted,  a wayleave for a new DSLAM to be situated close to the existing PCP (green box) on the A303.

In emails to Terry, Wiltshire Online have made the following claim:

“Unfortunately there has been a delay.  The surveying has thrown up an issue as a large length of existing infrastructure is buried directly into the ground so there is no existing ducting we can utilise. We are looking to install 1.7km of new ducting and the land this will need to cross is private land.  The team are working on the route and any necessary wayleaves that might be needed.”

The exchange goes on to say:

“It is certainly our intention to bring fibre to Winterbourne Stoke however, as my colleague Sarah has said we need to find a new route and get agreement from the relevant land owners which, depending on how receptive they are, can be a long process.  I honestly cannot say what timescale we are looking at, it is a significant length of new ducting but of course it is none of our interests to delay the build.
I would suggest contacting us again in the new year when we are likely to have a better idea of the proposed route and the challenge we face.”

Some of you are aware of the inaccuracy of this claim.  To save you having to read a lot of historical material, here is our email to Wiltshire Council earlier today:

Yesterday, I received an email from a villager, Terry Young, with whom I believe you have been having an email exchange on the subject of bringing superfast broadband to Winterbourne Stoke. The content of the emails was both alarming and depressing as they told a very different story to that we have had previously.

At the end of 2015, we were told by BT that fiber was being brought to the village and that it would be completed by late 2016/early 2017. In the summer, due to some confusion caused by incorrect statements (and leafletting campaign) being made about superfast broadband availability in the village by both BT and Wiltshire Online, we were re-assuredby BT that things were still moving forward, that we were now in the “build” phase but there had been a slight delay and that we should expect the work to be completed in Q1 2017. We were also encouraged by the fact the BT had sought, and been rapidly granted, wayleaves for the new DSLAM to be situated on the A303.

I wrote to Bill Murphy back in October of this year to seek an update and he had passed this on to Kevin Rutterford for action, though despite a chaser, the Parish Council are still waiting for this.

Your emails to Terry Young suggest the delay is likely to be considerably longer than this with no time frame given. I am particularly concerned by the mention of the need to provide 1.7km of new ducting, the inference being that this is something that has only recently come to light. Nothing could be further from the truth as both BT and Wiltshire Council have been aware of the state of the ducting issue since at least August 2008 – as internal BT emails obtained under the Data Protection Act clearly show. Both Ian Baker and Bill Murphy discussed this issue with me, in the course of a discussion on the failing aluminium cabling between the village and the exchange, at a meeting in Warminster in May 2013.

Consequently, I would be very grateful for a full update on the situation, an explanation as to why it has taken so long to understand the ducting issues and a very, very clear timeline to show to the Parish Council and parishioners, what work needs to be done, when it will be completed by and when people will be able to sign up for a reasonable broadband  service. Furthermore, the Parish Council would like monthly updates on progress or lack thereof.

It would also be helpful to know of potential routes so that we might intercede on wayleave issues, if that is needed! Indeed, if there is an issue with wayleaves in the Parish, I am surprised that you have not yet brought this to our attention.”

We will keep you updated with the responses we receive from all parties.  We look forward to receiving some comments on the issue!

We Need Your Help!

From time to time, we are going to use the Forums area of the site to seek your opinions on issues of direct interest to the village, but you will need to register to have your say.  At the moment (December 2016) We are seeking your help in deciding the fate of the red telephone box on the A303 and where we might be able to site a public access defibrillator.  The best way forward, in both cases, may be linked or may be not.  We need your input, so just click on the links in this text to see what it is all about.

If you are going to register on the site to comment on posts or participate on the forums, which is something we want to encourage, we would ask you to enter your first name and last name in the sign-up process, as well as picking a nickname.  The purpose of this is simply so we know that you are really a villager and entitled to have your views considered.  Sadly, in this day and age, it also reduces the chances of abuse.  Applications must now be approved before you can participate.

Well, the Parish Council leafleted most of the village last Friday and we have already had some positive verbal feedback and we have had a useful contribution which has illustrated the benefit of doing this sort of thing on-line, rather than the traditional way of doing things on paper.  Now we are not saying the traditional way is wrong, but it is very inflexible and much more time consuming than doing things online, so if you have an event that changes after a publication has been sent off for printing, there may be no way of correcting it.  At best, you may have to send out a correction slip to every recipient.  Here, it’s a matter of a few keystrokes and the change of time or venue is corrected.

Better still, if you have an electronic diary (Google Calendar or iCal), you can add a diary event to your electronic device with a single click saving you time and effort. 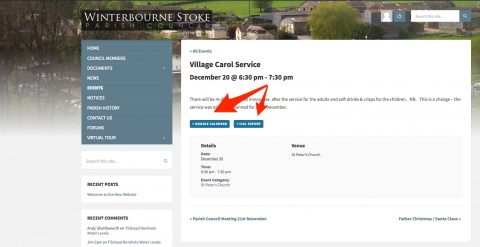 Of course, if you still prefer a printed version, you can always print one out for yourself.

Hi there and welcome to the new website for Winterbourne Stoke Parish Council.  It’s all part of the greater transparency that is being demanded at all levels of government and should make it easier for you to find out what is happening and why.  We want the website to be much more than that – a resource that you will all want to use and which will carry all the sorts of information that will make your life a little bit easier.  Just imagine all the stuff someone moving into Winterbourne Stoke wants to know when they arrive – everything from finding a good butcher to a plumber and everything in-between.  How about jobs in the local area, or a good restaurant, a retirement home for Uncle Fred?  That’s just some of the stuff we want to put on the site.

We aim to add more content soon and hope all our friends in Winterbourne Stoke will want to get involved.  Please come back soon and feel free to send us any relevant content that you would like us to consider for publishing or start a topic in the Forum for more general discussion.